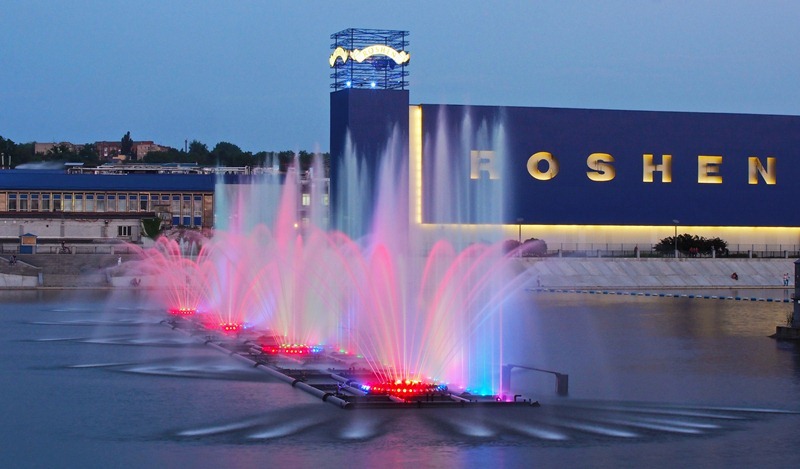 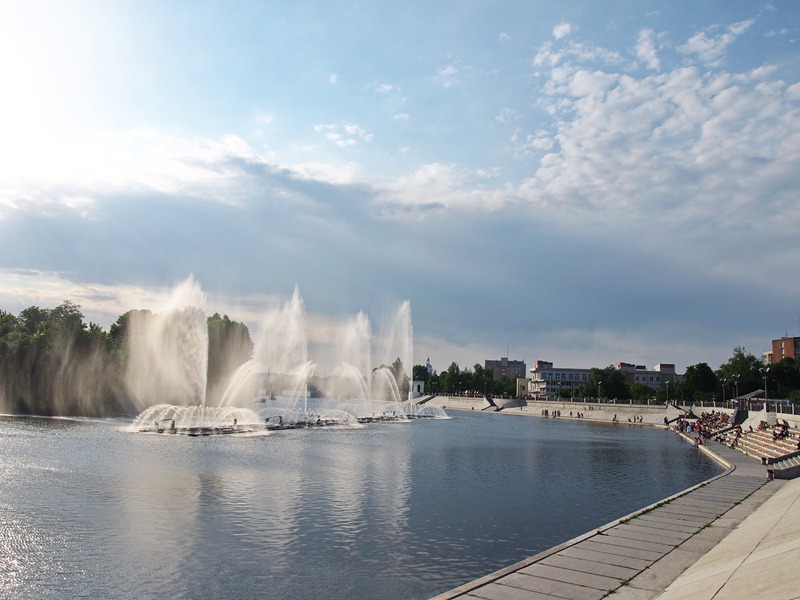 The world’s largest river light-and-musical Fountain on open water reservoirs and the reconstructed Embankment “Roshen” were opened on September 4, 2011. The “Fountain” is located in the course of the Southern Bug River and has a length of 140 meters and a jet height of 60 meters.

This socio-cultural and infrastructure project was fully implemented at the expense of the investment of the Petro Poroshenko Foundation. The total cost of the project Roshan and Fontana Embankment exceeds 70 million hryvnias.

The whole area of ​​the promenade Roshen is almost in perfect condition. To the fountain 300 m, the total length of the reconstructed coastal zone of the Southern Bug in Vinnitsa is 700 m.

In order to install the fountain and carry out the reconstruction of the waterfront, work was carried out on the cleansing of the southern Bug river bed in the volume of 28,000 m3 of soil. Using a laser projector with a screen and a water-air mixture, distributed throughout the length of the fountain, allows you to display on the fountain video in 3-D format.

The uniqueness of the Roshen fountain is that it is not stationary, and floating, it is flooded for conservation in winter, being in the cold days under the ice. He is the largest in Europe among such.

When the Sun sets in, the fountain begins to sparkle without illumination – the oncoming light creates a natural illumination of water jets.

Due to the effect of full internal reflection, with the help of water-based lighters, the water cannons from the bottom to the top can change the color from yellow to blue.

We wish you a great time and enjoy the Roshen Fountain at the highest level! 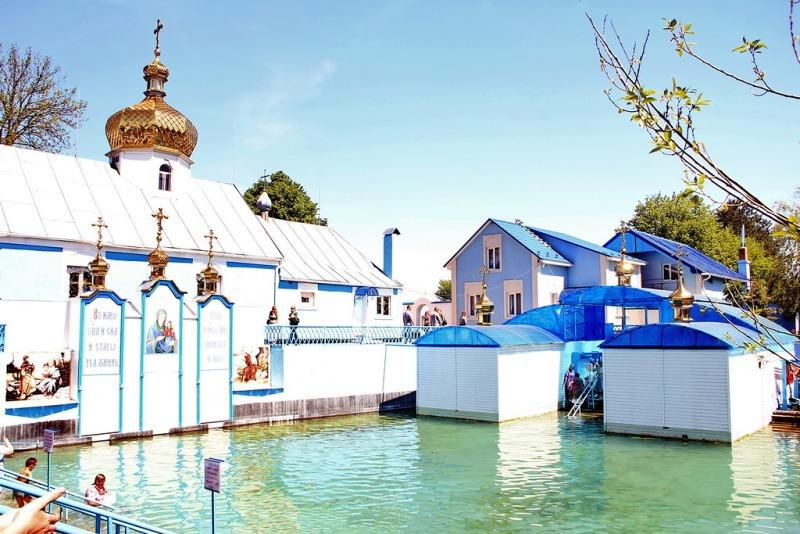 Uspenskaya Pochaev Lavra – the second most prominent Orthodox monastery in Ukraine (after the Kyiv-Pechersk Lavra). Majestic and at the same time elegant churches of the monastery built on a high hill. To this day, a legend has emerged about the appearance of the image of the Mother of God on the fire pillar in the Pochaev Hill for two monks and the shepherd Ivan Bose. On the rock, where, according to legend, they saw Virgin Mary, her foot was printed, and from this place a source broke out. Today, the Pochayiv Icon of the Mother of God and the imprint of the foot of the Virgin are the main shrines of the monastery.

You will also visit the place where the Mother of God appeared and listen to the monk’s story about the spiritual history of this holy place.

Those who wish to heal the soul and body, to purify themselves from their sins, may dip into the water of a small lake of St. Anne’s source. 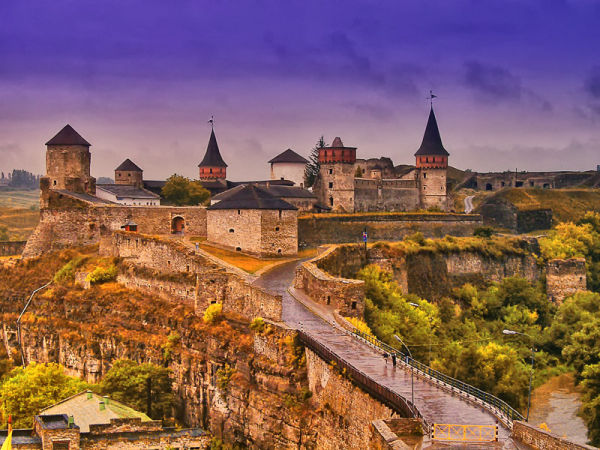 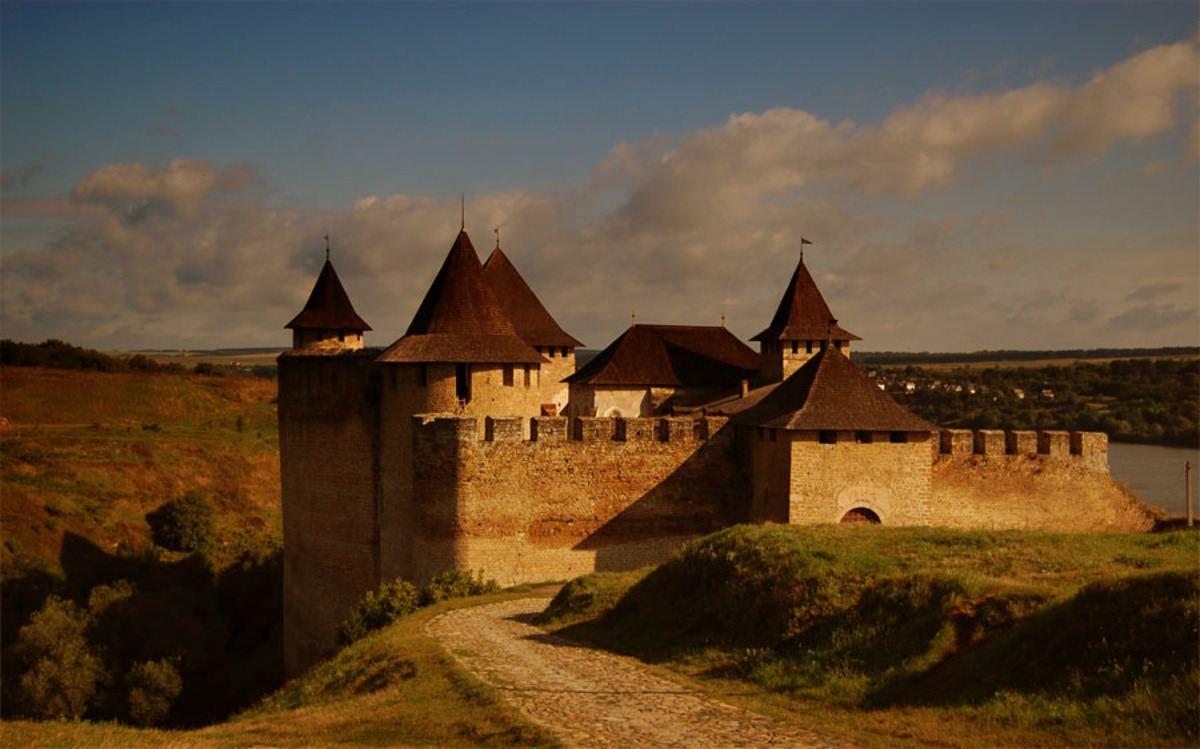 An amazing city to visit everyone. Kamenets-Podilsky is the third largest number of architectural monuments in Ukraine. Most of them are located in the “Old Town”. Kamenets-Podilsky is a city that has kept the spirit of the Middle Ages. Here you will see one of the largest defensive structures in Ukraine – a fortress that occupies a leading place in the world history of defense architecture.

Kamenetz-Podolsky castle is located outside the city, it is located near the only entrance to the city. The primary stone castle buildings were erected in the XII-XIII centuries. In the XVI century. He has repeatedly expanded, rebuilt; Finally his likeness developed in the middle of the XVI century. The beauty of the castle’s premises give an idea of ​​the tile with plant ornaments or storyline reliefs. Among them, attention is drawn to the image of horse warriors. They were decorated with doors, shutters of living quarters or furniture and trunks. For lovers of sophisticated torture, we recommend visiting a local cellar with a camera of torture. In one of the halls you will find an exhibition of folk life at the time when someone still lives in the fortress. You will see samples of weapons, clothes and find out the history of the fortress. After this exhibition, climb the tower of the fortress.

1000-year-old Khotin is one of the oldest cities in Ukraine. Its history dates back to the ancient past – archaeologists include the emergence of the city until the VIII century, when the eastern Slavs began an active process of formation of statehood.

Khotyn is famous for its fortress first and foremost. Although in Khotyn it is worth visiting the Holy Pokrov and St. Nicholas Churches. From Nedoboyevskoy mountains you can see a magnificent panorama of Bukovyn village with windmills of the XIV century. The renowned Khotin’s mineral springs.

Fortress is the most interesting object of Khotin

One of the most significant monuments of architecture and military-fortification art of the past in the Chernivtsi region is the Khotyn Fortress. Its walls are up to 30-40 m in height and 5-6 m in thickness, earth shafts with bastions and deep ditches are of great interest to all who visit this fortress over the Dniester. Events of the military history of the fortress emphasize its power.

In the fortress there were shootings of popular films: Zakhar Berkut, Ballad of the Valiant Knight Aivengo, Three Musketeers, Arrows Robin Hood, and Taras Bulba. In 2007, Khotyn fortress was included in the list of “7 Wonders of Ukraine”. 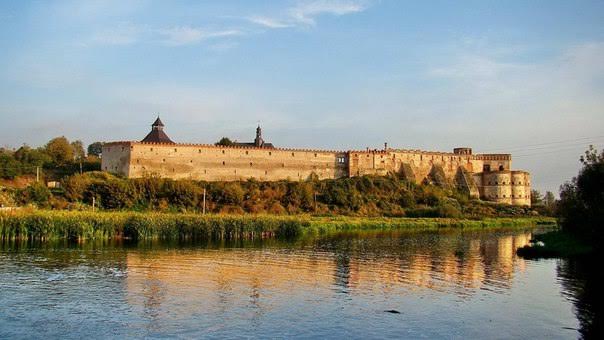 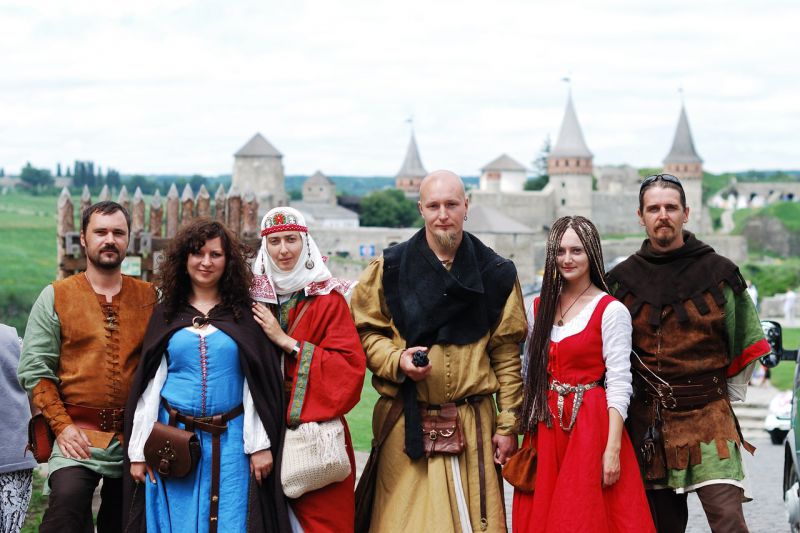 Built by the princes Koryatovichi in 1362, on the site of the confluence of the Bugok River in the Southern Bug, where in the XI-XIII centuries. There was an ancient Russian city Mezhibozh. The fortress is huge and majestic. Medjibi castle became an outpost on the eastern border of the Grand Duchy of Lithuania. During the First and Second World Wars, the castle was badly damaged, but still preserved. The museum’s exposition is open in the restored part of the castle. There is a restoration of the palace and the castle church. In August there is a festival with knight tournaments “Ancient Medzhybizh”. 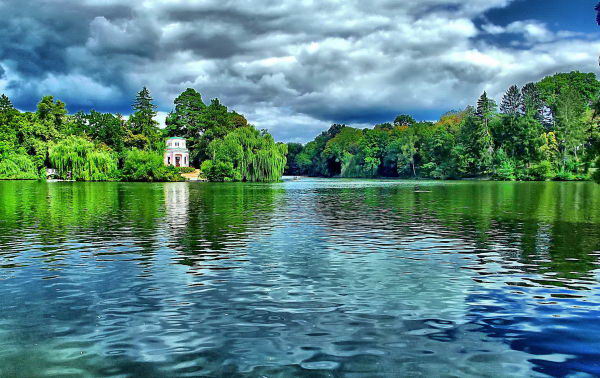 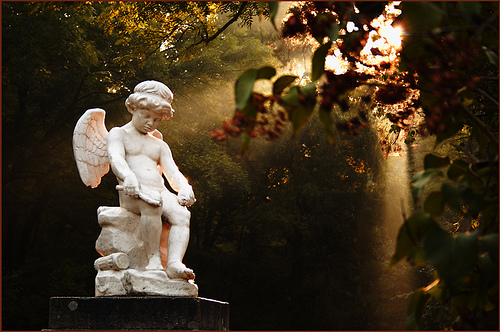 Sofiyivka – National Dendrology Park of Ukraine, without exaggeration, one of the best places created by human hands.

You will learn about the history of the foundation, construction and development of the park for more than 200 years, walk through its alleys, and admire the scenic views.

According to the plan of its founders, “Sofiyivka” is a clear illustration to the poems of Homer “Iliad” and “Odyssey”, where every composition or small architectural form contains a certain idea, expresses the idea of a myth or some event. 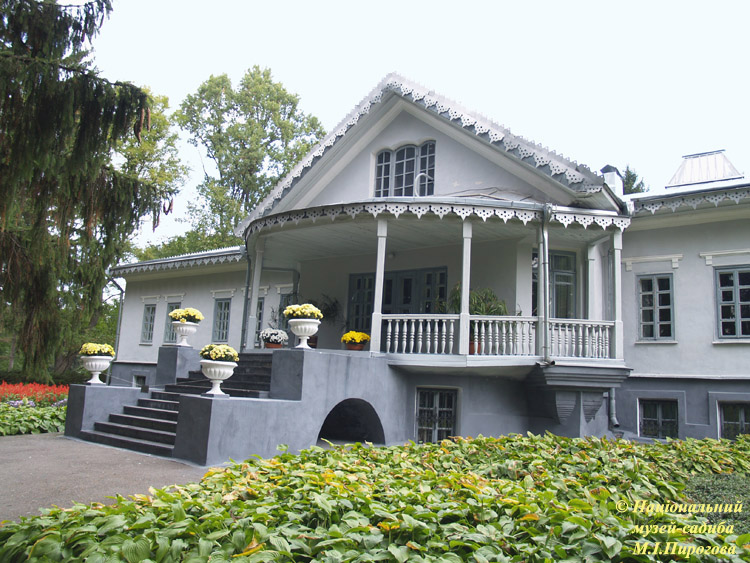 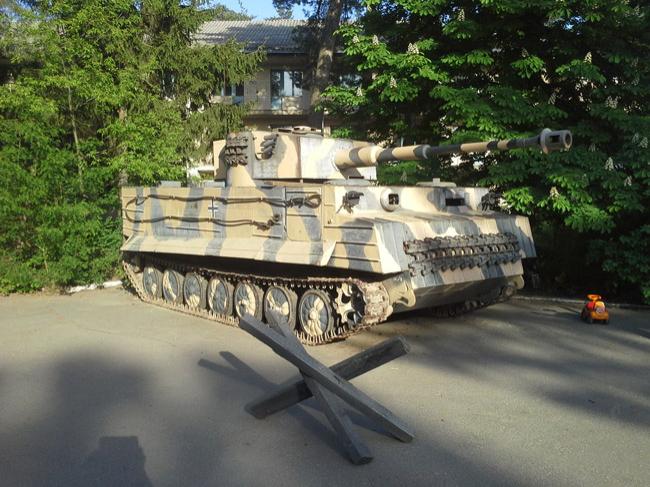 The construction of Hitler’s bunker “Werwolf” in 8 kilometers north of Vinnytsia was conducted from December 1941 to June 1942 in conditions of complete secrecy. The first stage was put into operation in April 1942.

Historical sources indicate that German contractors, who did the main secret jobs, took part in the construction, freelance citizens from European countries – from Germany, Poland, Holland, and the prisoners of war of the Red Army and the local population were involved in work on the construction of pits, mining of granite in Quarries outside the central zone. The site employs more than 10,000 Soviet military personnel.

The Pirogov National Museum-Museum is located in the southwestern part of the city of Vinnytsia, in the picturesque Manor of Vyshne, where during the last twenty years (1861-1881) a prominent scientist, a brilliant surgeon, anatom, a creator of military field surgery, the founder of the Red Cross Society , A wonderful teacher and public figure Nikolai Ivanovich Pirogov.

The purpose of the National Museum-Manor of Pirogov is to preserve the special cultural environment that was in the life of the scientist.

It defines the meaning of the museum presented interrelated system of cultural heritage and monuments of landscape art, which include:

The museum belongs to the most important cultural heritage sites in Ukraine and holds a special place in the domestic and international tourism. 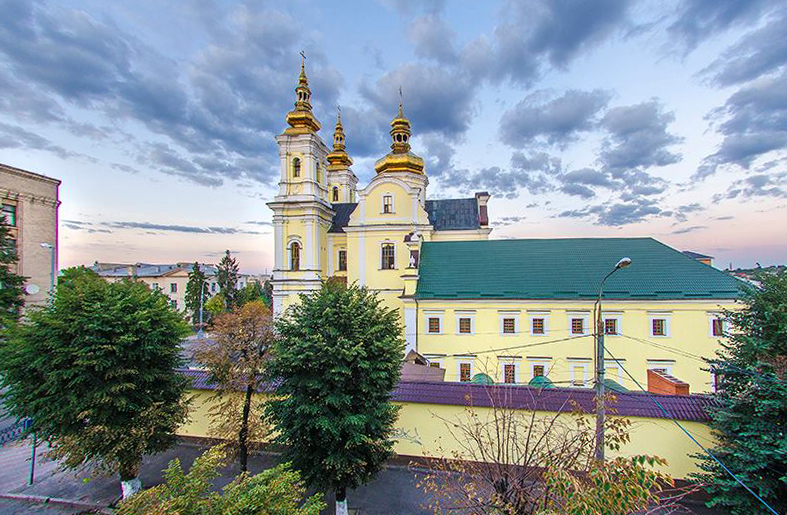 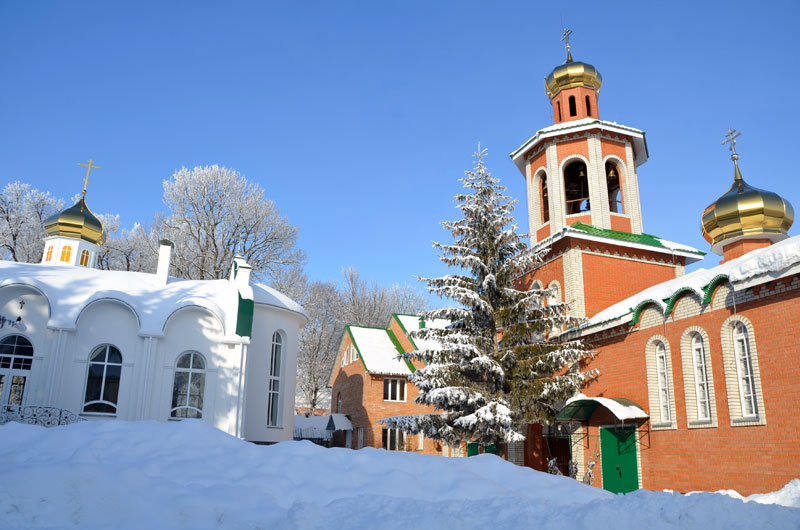 During the time of the existence of the John theological monastery, three temples were built here: the Apostle John the Theologian, the Rev. Theodosius of the Pechersk (goblins church) and the Nativity of St. Nicholas (consecrated in 2011 by Metropolitan Simeon). The last, by the way, is the only temple in Ukraine with that name. In 2010, Archbishop (now Metropolitan) Vinnitsa and Mohyliv-Podolsky Simeon (Shostasky) consecrated a place for the construction of the cathedral temple monastery, which will also be devoted to its heavenly patron – the Apostle of Love John the Theologian.

In addition to the temples, the brotherhood built a prefectural building, a brick fence. Outside the monastery, in the village. Lemaishivka, the monks have four Scythians, where they practice prayer, take care of the elderly, work on various economic activities: grow cattery, keep cattle, and have hives with bees. To decorate the temples during worship, the Lemeish monks grow wonderful roses.

In addition to the prayer feat and bodily works, the Lemesh monks are famous for their hospitality. All who come to the monastery to pray, be sure to feed, they will listen to each and give the necessary advice. 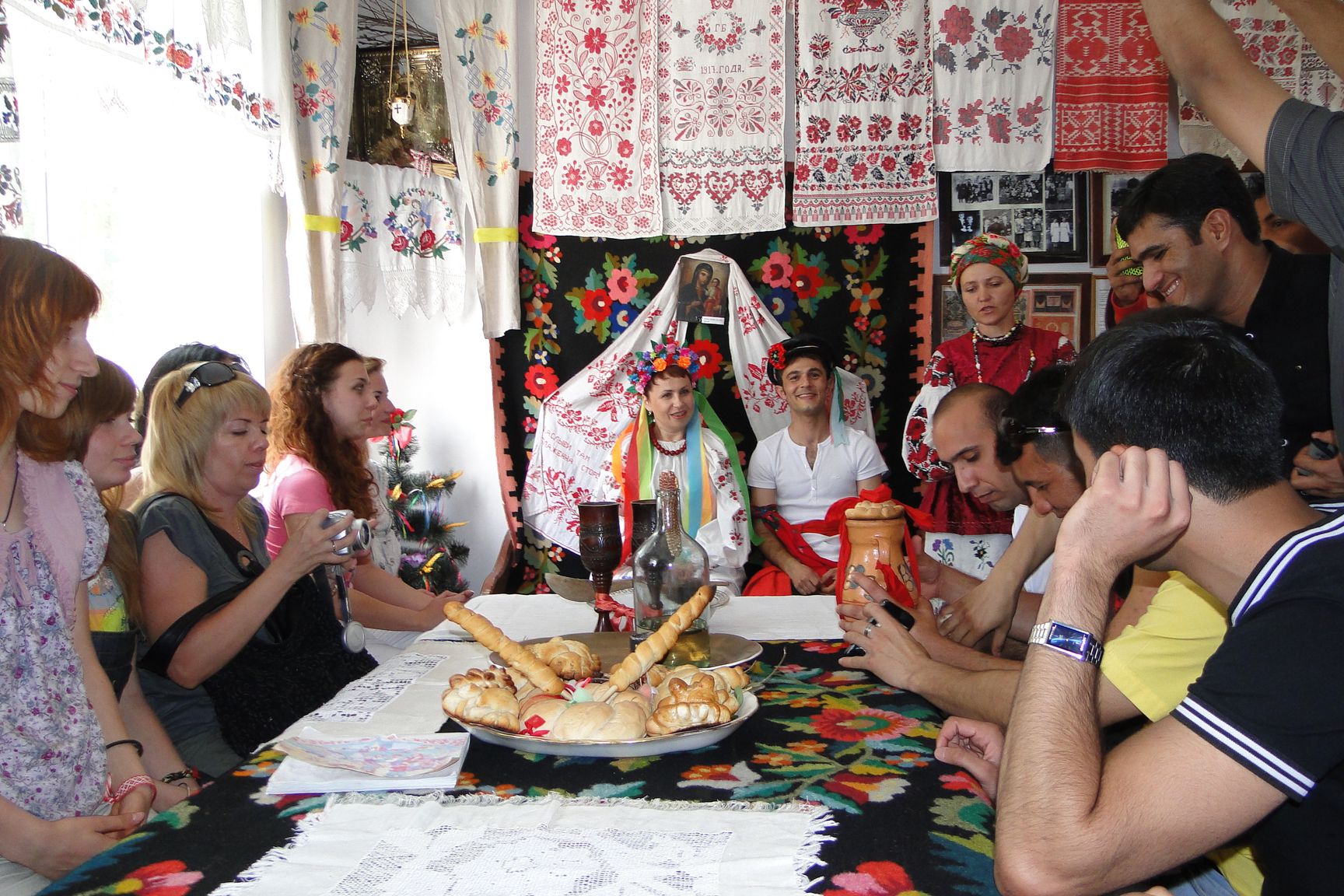 We offer this program to the holiday-makers of the “Podillya” sanatorium.

Our holiday entertainment program starts at the gates of the mansion. We frequent guests with a glass of homemade snack and all this – under the funny songs of the folk band.

Oh, these evening parties will not be easy, but special, because the guests gathered not just for the occasion, but for the wedding.

It will be dedicated to our fun act, during which we will have fun, dance and sing, giving special attention to the main thing. Of course, for a good Ukrainian snack with a glass of what anyone wants.

How about a wedding without a bride and groom. We kindly select them, and start our wedding. In the continuation of a merry festive evening you will get acquainted with all the fun rites that accompany the Ukrainian wedding in Podillya for centuries. Take part in competitions. Sing the Ukrainian song and dance the hopak.